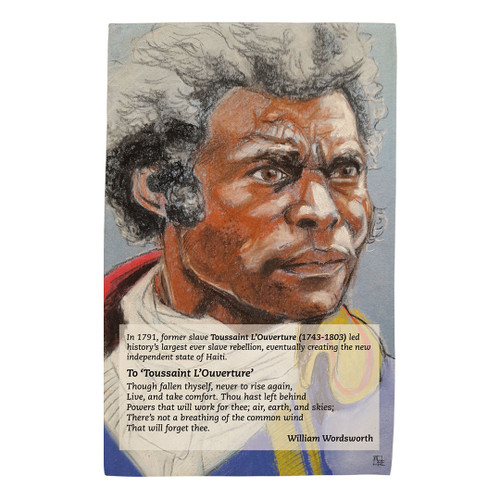 Toussaint L'Ouverture (also known as Toussaint Louverture) was born a slave on the French colony of Saint-Domingue, now known as Haiti, becoming a free man and a Jacobin. His military career began when he led the 1791 Haitian rebellion, the largest slave rebellion in history. Throughout his years in power, he worked to improve the economy and security of Saint-Domingue. restored the plantation system using paid labour, negotiated trade agreements with the UK and US and maintained a large and well-trained army. He promulgated an autonomous constitution for the colony in 1801, which named him Governor-General for life. In 1802, he was arrested by the French, deported to France and jailed at the Fort de Joux where he died.

In his poem 'To Toussaint L’Ouverture' William Wordsworth makes a hero of him as the most prominent of the Haitian revolutionaries, to the extent that his poem can be seen as an elegy to a dying man. Wordsworth first published the poem in 'The Morning Post' on February 2, 1803, probably having read the news that Toussaint had been imprisoned in the Fort de Joux since June, 1802. Toussaint died two months after the poem first appeared.