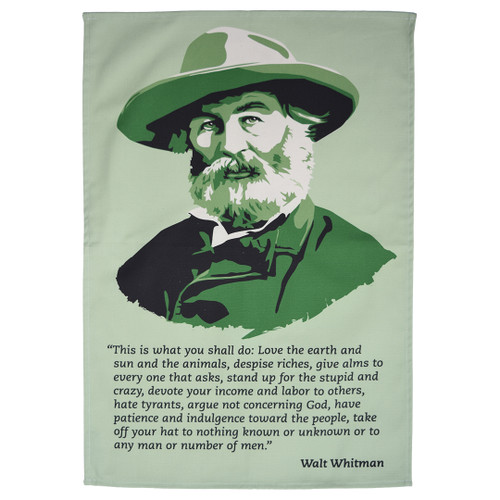 Now known as one of the most significant American writers of the 19th century, and perhaps the nation’s greatest poet, Walt Whitman started off working as an apprentice printer at a newspaper, at only 11 years of age. In 1838, he founded his own weekly newspaper on Long Island, reporting and writing stories, printing the paper, and even delivering it on horseback by himself. By the early 1840s, he had broken into professional journalism. It was in the 1850s that his focus turned to poetry, and in 1855 he published his collection, ‘Leaves of Grass’, inspired by the things he found fascinating: the crowds of New York, the modern inventions the public marvelled over, and the raucous politics of the 1850s. Seminal as it is now, his book went largely unnoticed at the time.

Whitman carried on however: he saw ‘Leaves of Grass’ as his life’s work. Rather than publishing new books of poems, he began expanding and editing the collection, a practice which he continued over the course of his life. The work became very influential – as did he – and controversial in its time, due to mentions of homosexuality. The words on our tea towel come from Whitman's preface to the original edition; the extended passage is reproduced here:

‘This is what you shall do; Love the earth and sun and the animals, despise riches, give alms to everyone that asks, stand up for the stupid and crazy, devote your income and labor to others, hate tyrants, argue not concerning God, have patience and indulgence toward the people, take off your hat to nothing known or unknown or to any man or number of men, go freely with powerful uneducated persons and with the young and with the mothers of families, read these leaves in the open air every season of every year of your life, re-examine all you have been told at school or church or in any book, dismiss whatever insults your own soul, and your very flesh shall be a great poem and have the richest fluency not only in its words but in the silent lines of its lips and face and between the lashes of your eyes and in every motion and joint of your body.’