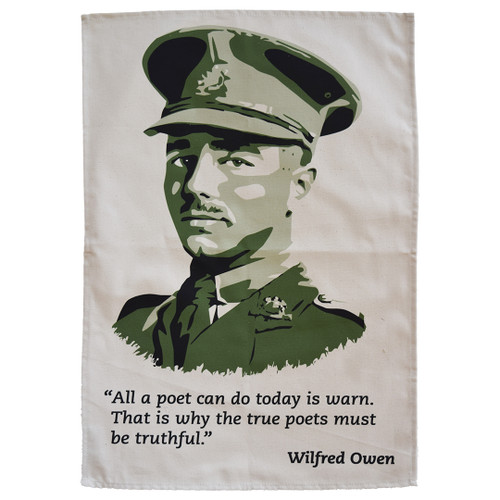 ‘All a poet can do today is warn. That is why the true poets must be truthful.’

And Wilfred Owen certainly wanted to be truthful: through his work, he aimed to tell the truth about what he called ‘the pity of War’ – the physical and mental trauma of combat. Widely recognised as one of the greatest English poets of the First World War, Owen wrote from the perspective of his intense personal experience of the front line in poems such as Anthem for Doomed Youth’ and ‘Dulce et Decorum Est.’ In the latter, he rejected the much quoted Latin proverb ("it is sweet and fitting to die for one's country") as "an old lie", contrasting starkly with that of writers such as Rupert Brooke who sought to praise a soldier's patriotic duty. Here he is on this tea towel in his officer's uniform, with a soulful look in his eye. Could he have known that he would not last the War? He was killed exactly a week before it ended, and his mother received the fateful telegram on Armistice Day. It was not until after his death that most of his poems were published and he became celebrated as a poet. However, aware that his work could do nothing to help his own generation, he succeeded in warning the next, his poetic legacy having a major impact on attitudes to war, even today.

Here is an extract from his poem ‘Dulce et Decorum Est’:

‘If in some smothering dreams you too could pace
Behind the wagon that we flung him in,
And watch the white eyes writhing in his face,
His hanging face, like a devil's sick of sin;
If you could hear, at every jolt, the blood
Come gargling from the froth-corrupted lungs,
Obscene as cancer, bitter as the cud
Of vile, incurable sores on innocent tongues,—
My friend, you would not tell with such high zest
To children ardent for some desperate glory,
The old Lie: Dulce et decorum est
Pro patria mori.’