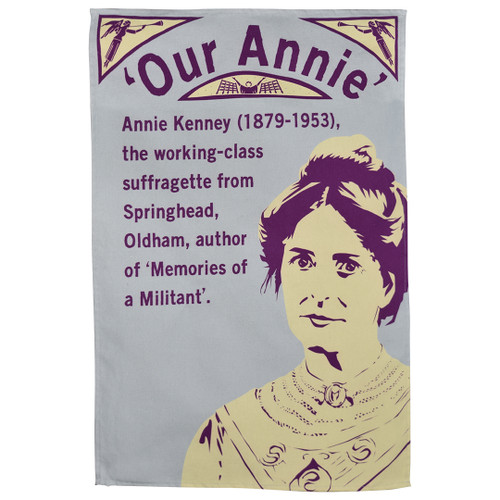 Annie Kenney was a British suffragette who rose to second-in-command of the Women’s Social and Political Union (WSPU), the organisation that eventually got women the vote in England.

She was born near Oldham in 1897 and started work in a cotton mill aged 10 as a "half timer" - working in the mill in the mornings and attending school in the afternoons.

In 1905 Annie and her sisters, Jessie and Jane, went to a meeting in Oldham where Christabel Pankhurst spoke about voting rights for women. Annie was so inspired that she was soon organising and speaking at meetings, and joined the WSPU which Christabel had recently helped form.
In October of the same year she and Christabel interrupted a Manchester rally to ask Winston Churchill if they believed women should have the right to vote. They were thrown out and jailed – but it was a pivotal moment in the suffragette campaign, seen as a movement towards more radical, direct protest. After that, she was imprisoned 12 more times, and went on hunger strike in prison.
She wrote: ‘The law may be stronger than I am, but if I may not change the wicked law that holds in bondage the smitten womanhood of this country, I will at least die in the attempt to change it’.
Her words may have been prophetic as she experienced long-term health problems, which may well have had their roots in her times on hunger strike. Annie died on 9 July 1953.
Half Panama unbleached cotton (heavy weight, textured finish). Stitched on all four sides. Includes hanging loop. Measures approximately 48 x 70cm. Machine wash at 40 degrees max. We recommend that before you use your tea towel for the first time you wash it at least once to soften up the material and make it more absorbent for drying dishes. Please note size can vary slightly.