"The philosophers have only interpreted the world in various ways; the point, however, is to change it." - Karl Marx


It’s the late 1870s. Imagine Karl Marx sitting by his fireplace on a winter's evening in London.

He’s surrounded by a happy scene of family and friends. His daughters, Eleanor and Laura, sit by the tree laughing at Engels’s stories of his troublesome youth with their dad.

But Karl can’t fully enjoy the festivities. Like Charles Dickens’ Scrooge, he’s haunted this Christmas time. Not by a ghost but by the words I’ve quoted above (which are now inscribed on his tomb at Highgate Cemetery).

Marx is worried about whether he has really changed anything in the world, or merely interpreted it like the philosophers.

The quotation is from Marx's 'Theses on Feuerbach', written in 1845. It was a time when everywhere in Europe seemed on the brink of revolution. That year, Engels introduced Marx to the Chartists in England. In 1847, with the old order at breaking point, the two men wrote the 'Communist Manifesto'.

This ferment all came to disappointment, however. The 1848 revolutionary storm that engulfed the old states of Europe – in which Karl Marx and his Communists played a very small role – was over almost as soon as it began.

Governments everywhere put down the uprisings. For the rest of Marx’s life, conservatism dominated the continent. Marx and his comrades hadn’t changed the world.

Just a few decades after his death, men and women in faraway Russia, inspired and instructed by Karl Marx’s works, put an end to one of the greatest tyrannies of the modern world. They did it 100 years ago today.

Behind the leadership of Vladimir Lenin, the Bolsheviks stormed the Tsar’s Winter Palace and took control of Russia. The Russian workers pulled down a Romanov Dynasty which had abused the people for hundreds of years, and threw up in its place the first socialist government in history. 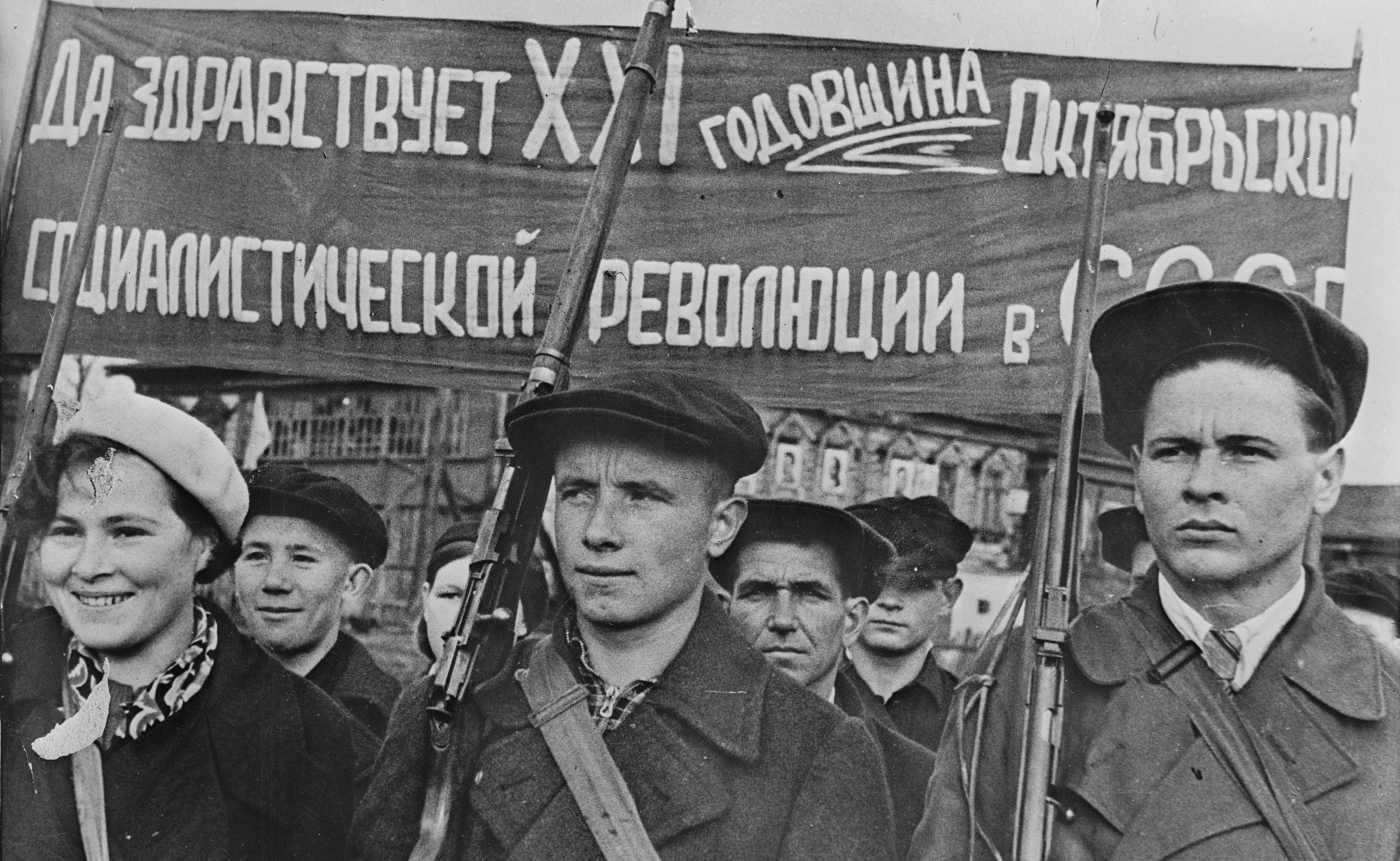 Above: 1938 celebration of the October Revolution in the USSR

In his life Marx had only been able to dream. Lenin had brought those dreams about. And for people like Marx and Lenin who seek a better world, doing is the ideal.

Of course, Lenin is a more controversial figure than Marx. In history – including radical history – that’s usually what happens when someone drops their pen and walks onto the stage. Doing things is messy and flawed because people are messy and flawed.

The 'October Revolution' was not without drawbacks and should be treated critically - the repression of rival parties, the execution of the Tsar and his family. And when Stalin took control after Lenin’s death, the country fell from the high hopes of 1917 and fell hard.

Marx and Lenin would have been angry to see their names attached to the brutal totalitarianism that followed.

But before then, Revolutionary Russia had struck some real blows for progress.

Russian conscripts were pulled out of the bloodbath of the First World War. Economic reforms were implemented. Homosexuality was legalised, a full fifty years before Britain.

Imperialism was denounced. So was racism: my great-grandparents fled the anti-Semitic pogroms organised by the Tsars around 1900. They would have been welcomed by Lenin’s Soviet Union. Lenin himself was part-Jewish, and so were a lot of other Bolsheviks like Leon Trotsky. For the first time, Russia became a place where Russian Jews were treated as just Russians.

And what's with the whole 'October Revolution' thing being celebrated in November? The Bolsheviks were the ones to finally switch Russia's calendar to the Gregorian version in use in Western Europe. Progress!

Whatever came afterwards, the Revolution's achievements should be respected. And the memory of those heady days, when the power of the people overcame the power of the palaces, has inspired many a radical since.

If he’d lived to see Christmas 1917 I think it’s safe to say that Marx, with a close eye on Russia, would have been excited about the New Year. He was going to change the world after all.